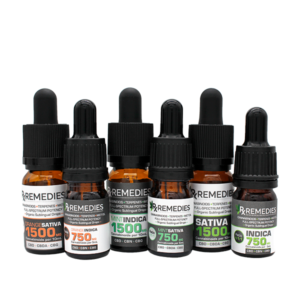 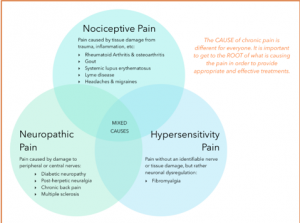 Nociceptive Pain is the most common form of pain and is caused by the stimulation of nociceptors (pain receptors for tissue injury). Tissue injury can include skin, muscles, visceral organs, joints, tendons, or bones. Nociceptive pain usually changes with movement, position, and load.

Neuropathic Pain is damage to the nervous system, and occurs when nerve fibers themselves are damaged, dysfunctional, or injured. The damaged fibers send incorrect signals to other pain centers. This process of automatic, firing can last indefinitely and represents one cause of persistent physiologic pain.

Hypersensitivity or Inflammatory Pain refers to increased sensitivity to pain following acute injury or treatment with opiates. While some pain types overlap and include both nociceptive and neuropathic, it is rare. Hypersensitivity attempts to differentiate a dysfunction of the nervous system versus damage.Upon diagnosis, pain is measured based on a self-assessed Numeric Pain Rating Scale (NPRS) from 1 to 10, where “0” is no pain, and “10” is extreme pain. The three NPRS categories are mild (<4), moderate (5-6), and severe (>7). However, pain is completely subjective, meaning it is based purely on the patient’s perception. To date, there is no reliable test that can quantifiably measure pain, which can often make it difficult to accurately and successfully treat.Once a patient’s pain has been classified and rated, what treatment is applied depends on whether the pain is acute (short-term) or chronic (long-term).

Acute Pain usually lasts less than three months (hours to weeks) or is directly related to soft tissue damage. Although short duration, it resolves once the injured region heals. Acute pain is distinct from chronic pain and is comparatively more sharp and severe. Acute pain generally does not cause significant psychological or emotional trauma and is often treated with analgesics.

The Pain Pathway and Pain Therapies

Pain perception is the method by which the body processes stimulus, whether it be mechanical (pressure/pinch), chemical or thermal. The pain perception pathway involves four steps: transduction, transmission, modulation, and perception. 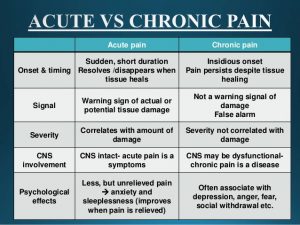 Regardless of the classification, duration, or intensity, understanding the physiology and pathways of pain is imperative to developing and implementing effective treatments. Present pain therapies include physical therapy, cognitive behavioral therapy, transcutaneous electrical nerve stimulation (TENS), meditation, relaxation techniques, visual imagery, biofeedback, heat and cold therapies, acupuncture, and manipulation and massage.While pain itself is highly subjective, selecting the optimal therapy to manage it requires objective standards. Treatment plans for acute pain are relatively straightforward, whereas diagnosing and treating chronic pain is neither straightforward nor well-defined. As such, combinational therapies involving medication, and any treatments listed above should be considered, following a thorough examination of the patient (i.e. historical, physical, neurological, and musculoskeletal).Medical care providers realize the current medications for pain management are inadequate, oftentimes doing more harm than good with side effects ranging from nausea, stomach ulcers, constipation, and addiction. These inadequacies, particularly the opioid epidemic, have paved the way for new therapeutic treatments, such as the cannabinoids CBD and THC found in cannabis.

Categories of current pain medications include:

NSAIDs are over-the-counter (OTC) medications often used for mild to moderate pain and inflammation. Although predominantly seen as safe, prolonged use can increase the risk of heart attack and stroke, as the FDA warned in 2005. Similarly, acetaminophen is an over-the-counter anti-inflammatory and analgesic, yet is the most common cause of acute liver failure due to overconsumption and misuse. Corticosteroids can be used as an immunosuppressant for conditions such as rheumatoid arthritis, where the immune system attacks the joints causing severe pain and inflammation. However, corticosteroids are hormones, and by default, can have a wide range of side effects following consistent use (i.e. weakened muscles, nausea, insomnia, and mood swings). Opioids and muscle relaxants have long been used for effectively managing acute pain, but the evidence does not support long-term use of opioids for relieving chronic pain, as they are highly addictive, often leading to overuse and overdose. So much so, that the Department of Health and Human Services declared opioid abuse a public health crisis in 2018. Similarly, muscle relaxants also have the potential for abuse and addiction, as they act on the central nervous system as depressants, with side effects ranging from dizziness, agitation, and decreased blood pressure.
Acute pain (both nociceptive and neuropathic) is often treated with analgesics and anesthetics, which seems to be the common thread amongst these established pain medications; effective for acute pain, but unsafe for prolonged use (chronic pain). That is, except for cannabis-based products.

CBD for Neuropathic and Nociceptive Pain

We discuss neuropathic pain above, which is essentially pain caused by damage or disease affecting the somatosensory nervous system. The function of the somatosensory nervous system is to interpret bodily sensations, such as touch, pressure, vibration, temperature, and pain. Both the conception and continuation of neuropathic pain is often due to the glutamatergic system. Glutamate is the predominant neurotransmitter in the nervous system, as it is used in more than 90% of synapses. It is a powerful excitatory neurotransmitter that is responsible for sending signals between nerve cells, and under normal conditions, it plays an important role in learning and memory. It is the neuroprotectant qualities of CBD that may inhibit glutamate release, allowing CBD to potentially dull the prickling, tingling, and burning sensations associated with neuropathic pain. 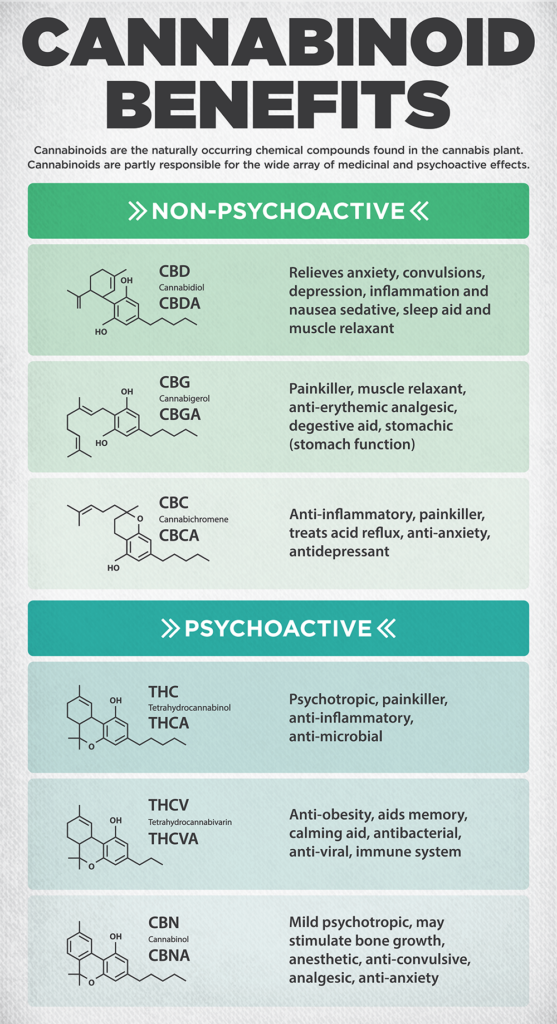 Inflammation plays a vital role in the healing process and is the response of the immune system to an irritant or a pathogen. When inflammation occurs, cells of the immune system release inflammatory mediators. These include the hormones bradykinin and histamine, which cause blood vessels in the damaged tissue to dilate. Increased blood flow allows for more immune system cells to reach the injury, and helps with the healing process. This increase of fluid to inflamed tissue is also why swelling occurs. Additionally, bradykinin and histamine irritate nerves, causing pain signals to the brain as a protective function. Meaning, if the inflammation hurts, you will be triggered to protect the injury.
Inflammation is an established root cause of nociceptive pain and becomes problematic when it moves from acute to chronic inflammation. This means the immune system cannot breakdown the irritant or pathogen, or the immune system is malfunctioning by attacking healthy tissue. Research has shown both CB1 and CB2 receptors of the Endocannabinoid System have been found on immune cells, which suggests that cannabinoids could play a critical role in regulating the immune system. Because of this, oral applications of CBD may show effectiveness in relieving chronic inflammatory and neuropathic pain. Additionally, a topical application of CBD may help in relieving localized inflammation and pain. Where CBD and other cannabis-based products separate themselves from other OTC and prescription pain medications is they are safe for prolonged use, meaning they are safe for chronic pain and inflammation. According to a report from the World Health Organization, “In humans, CBD exhibits no effects indicative of any abuse or dependence potential…To date, there is no evidence of public health-related problems associated with the use of pure CBD.”

potential for relieving both pain and inflammation. Not only because of the thousands of peer-reviewed scientific publications documenting its therapeutic properties.  And not just because cannabis has been used therapeutically for thousands of years. But because patients suffering from acute and chronic pain want and deserve safe, effective, and non-addictive relief.
Questions? Comments? Contact us at support@domain.com or contact@domain.com. We’re here to help